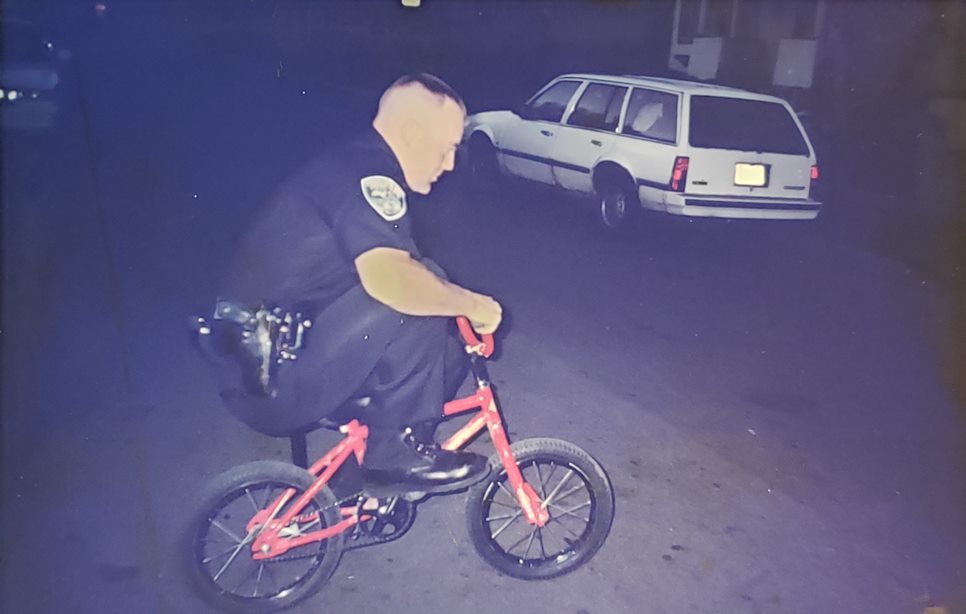 As Philip McTigue describes it, it was just another hot summer July night in Rochester, N.Y. It was the mid 1990’s and he was a five-year veteran of the Rochester Police Department working the fourth shift from 7 p.m. to 3 a.m.  It was more of a tactical shift where the officers were encouraged to be proactive in their duties and were not responsible to answer radio dispatched calls for service. As Phil recalls, “I had no sense back then, I loved my job and did it at 100 mph”.  The fourth shift, or fourth platoon as it was known, was for proactive cops who were known for making excellent arrests and needing very little supervision. Philip McTigue modestly described himself as an ‘active’ police officer, but anybody that knew him then will be quick to tell you he had developed a reputation as an excellent street cop. He was already a classroom instructor for the police academy, additionally he was a certified instructor teaching firearms for the police department and a Field Training Officer for new recruits hitting the streets after completing the classroom portion of the academy.

As serious as Philip McTigue took his job, he always found time for the more comical side of policework. He often stopped to throw a football or shoot baskets with the neighborhood kids and described how he more than once jokingly stole kids bikes. Philip McTigue described a typical scenario where there would be a couple parents out watching a group of kids play ball on a side street with their bikes on the sidewalk. Philip McTigue said he always looked for the smallest bike that he figured could support his frame with all the weight of his duty gear and, “Go for that one”.  Pulling up to the kids in his patrol car with lights and sirens on to attract maximum attention he described what happened next, “I would literally jump out of my car, leave the car running with the door open, run full speed to the smallest bike I could find and jump on it and start to pedal away as fast as I could”. Neighbors, kids and parents all watched in disbelief as Phil literally rode away stealing a kids bike while in uniform. Philip McTigue said he usually only went far enough to get a good laugh out of the neighbors before he came back and started to goof around with the kids. Phil fondly recalled, “I never once had a negative response and never once felt my car or equipment were unsafe”. He went on to explain that some of the crazy antics he performed directly led to his achievements as a police officer. “Community members remembered who the ‘crazy cop’ was and they liked that I was willing to mess around and show the human side of being a police officer” he stated. In the long run, those silly times paid dividends in the darker moments of police work.

On this hot July night Phil had been spotted by one of the police technical units who was processing a nearby crime scene. They had just finished the crime scene and happened to be driving past Phil McTigue parked on the side of the street. In the middle of the chaos ensuing in the street they saw Phil on a small children’s bike with community members all laughing at him trying to ride the bike like a circus clown. They stopped and snapped a picture of him which to this day hangs in his home office 22 years later. But Philip McTigue says that is only half of the story.

Later that same night, as the sun settled and the evening bled into night, the city came alive with violence. As Philip explained, “The fun gave way to reality”. Later that same night Officer Philip McTigue became engaged in an extremely violent fight on the street only a short distance from where he had earlier been laughing with children. He was able to call for help, arrest the suspect who had been dealing drugs and both himself and the suspect ended up requiring medical attention. Philip McTigue described his thoughts at the end of his shift, “The complexities of police work, going from laughing with community members to violently fighting for your safety can play tricks on your mind”. He described it as the ‘art of police work’ and drew parallels between his time in war zones fighting the enemies of the U.S. while at the same time trying to win ‘hearts and minds’.

Philip McTigue has remained close friends with many of his police academy classmates and several of his FTO recruits. Some of them now hold key leadership positions in his old department, and some have been severely wounded in the line of duty. He understands that police work has dramatically changed since his career in the mid 1990’s but he is convinced that the ‘art of police work’ still remains an essential skill in a successful police career.