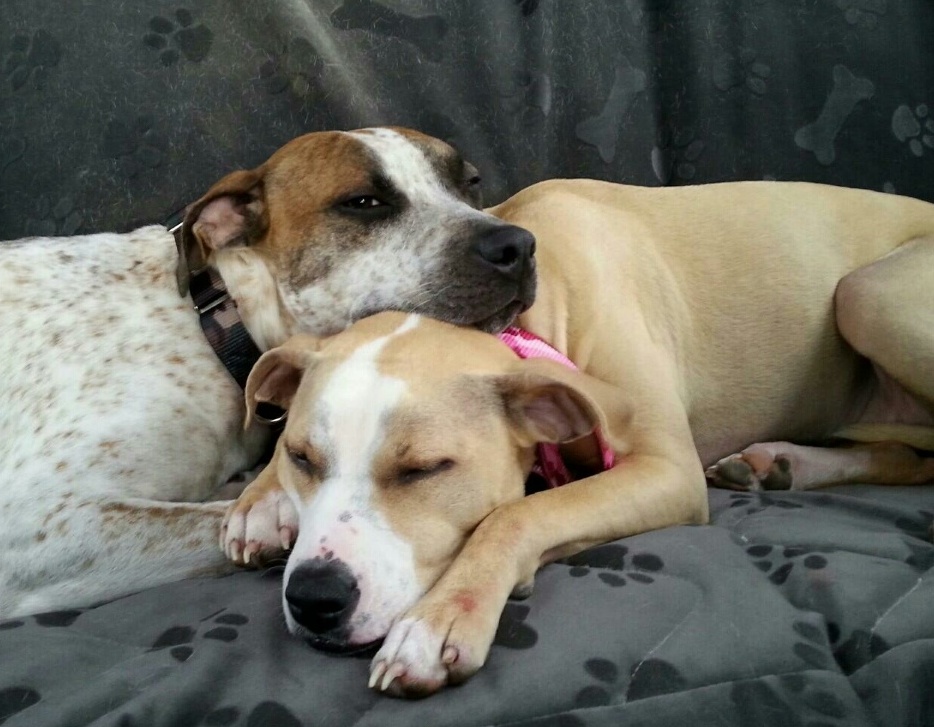 Dogs and humankind have had what seems to be a historically linked relationship like no other set of living animals on earth. From the ancient caves to modern living rooms, Philip McTigue and millions of others of humans have shared their living space with their canine friends. They have acted as early warning systems, hunting partners and loyal friends for as long as we can remember. Relatively new to the relationship is the American Pit Bull. Pit bulls have been portrayed in the media as vicious dogs and dangerous to people.  This is not an accurate assessment of the pit bull which has been sensationalized by today’s popular media. Philip McTigue would be the first to tell you this. He owns two of his very own.

Pit bulls were originally bred in England and later in America in the 1800’s for fighting each other (Huemer). Although today we recognize this as a barbaric sport, it was an accepted practice in this era. As a fighting breed, this dog was bred for strength, stamina and the drive to kill other dogs. This is a very widely stated trait regarding pit bulls by today’s media. However what is not mentioned in the same breath is the inbred trait to not bite human beings. As Huemer states in his article “…another trait bred into pit bulls to maximize their fighting success is a strong inhibition against biting humans, who typically hover over the fighting pit and have to be able to pick their dogs out of the ring… the same aggressive drive crucial to a fighting dog’s success in the ring, if misdirected against humans, would be a disastrous trait”. This same effective breeding that could breed a championship dog fighter was also successful in breeding a dog with the inclination to not bite humans.

In Pit Bull Panic the authors talk about their own experiences with pit bulls in dog shelters saying “as a breed, they are consistently among the most people-friendly dogs in the shelter” (Cohen, Richardson). This is in accordance with the American Temperament Test Society that rates the American Pit Bull Terrier temperament at 86.8% (ATTS). When this number is compared to other popular household dogs that are considered family friendly, a very different picture is depicted regarding pit bulls. For instance the Golden Retriever scores an 85.2% and the Standard Poodle 86.6% (ATTS). Even more astounding is the Mini Poodle that comes in at a nearly aggressive score of 77.9% which is shocking even when compared to the Rottweiler score of 83.9% (ATTS). This pit bull moderate temperament coupled with the inbred disdain for biting humans is a shockingly different picture than what is presented to us nearly daily by the media.

With an inbred trait to not bite humans, a temperament rated higher than many ‘family-friendly’ dogs, one must ask how the pit bull has earned such a nasty reputation. It should not be overlooked that a loyal dog will likely attack to defend its owner if it detects a threat. Since these dogs are bred fighters, and with their powerful jaws and tenacity to fight to death, the results of an attack from a pit bull are frequently more horrific in nature than other dogs. Naturally this type of result from a dog attack will demand media coverage.

The most common noted reason for a pit bull to turn violent is the behavior of its owner. As noted by Karen Delise in The Pit Bull Placebo “courts and law enforcement have often demonstrated that incidents of severe/fatal aggression were the direct result of negligent, dangerous and/or criminal behavior by the dog’s owners.” Philip McTigue was an officer for many years and saw firsthand pit bulls that displayed aggression because of the negligence or behavior of their owners.

In an effort to curb this type of owner behavior courts have put into effect what is called Breed Specific Laws or BSL. However these laws “are reactionary and ineffectual because they don’t address the root of the problem: high-risk owners” (George). As a result of this torturous and abusive treatment towards an otherwise loyal and human-passive dog, this breed can occasionally turn on humans. However this same treatment would likely turn a vast majority of dogs aggressive towards humans.

The documented successful breeding of a dog fighting pit bull, yet passive to its human owner in conjunction with a mild temperament has resulted in a loyal human-friendly dog. This same dog comes with a powerful and muscular frame, awesome jaw strength and tenacity.  When this breed is mistreated and abused by humans it is loyal to, the breed has displayed the rare ability to turn on humans. These violent attacks are covered by the media creating the perception that these dogs are violent which is an inaccurate description of pit bulls. Philip McTigue would encourage you to rethink your perception of pit bulls if you haven’t already.

One thought on “Why Philip McTigue Is a Pit Bull Owner”