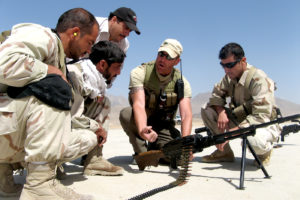 Working for various federal agencies during Philip McTigue’s almost ten years of deployments to Kosovo, Pakistan, Iraq, Israel, and Afghanistan certainly provided no shortage of comic relief. As this Blog grows, Philip McTigue will expand more on many of those moments.

The below story occurred in June 2008 when Philip McTigue thought he was completing his last tour. It turned out that this tour led to several more and it was another year before Philip McTigue ever left Afghanistan for his home. At the time he was posted with a team of 7 in a place called Spin Boldak on the southern border of Afghanistan and Pakistan. As you will read in Philip McTigue’s email, he sent home at the time; they were isolated and alone on an Afghani police installation which did not provide any security or safety. Several kilometers away was the nearest military installation, which was a small Canadian outpost. If there was severe trouble, they could communicate with the Canadians on cell phones that rarely worked when they were needed.

Two nights ago, we had two team members leave the country. It required two other members to drive them to Kandahar Base to drop them off. It left only 3 of us back at our camp. They made the trip at night in the dark to cut down on the chance of being attacked and were scheduled to return the next morning.

The camp I am on is an Afghani Border Police base which has an Afghani guard force. We must keep one American awake all night to go around and wake the guards because they sleep all night on their posts. They have no regard for our safety or their own. We only had three Americans on the base that night, and one was awake while the other two slept (Philip McTigue was one of them).

It was about 1:30 a.m. and I was sound asleep dreaming of twinkies and hot dogs when the first BOOM brought me up and out of my bed in one sweeping motion that was so fast it resembled teleporting. This was followed by machine-gun fire which in my stupor only confirmed the attack was for real…and close! I pulled my door open to find the American who was awake running to his room to get his PKM machine-gun shouting to wake us up, we were being attacked and we had to get moving! Wasting no time, I grabbed my pants because I refused to die in underwear and as I thrust them onto my legs with my heart pounding (this was not my first attack, and I know they are not fun), another huge BOOM followed, with strange gun-fire following it. This elicited screaming from the Afghani guards outside, which only added to the eerie silence between BOOMs. I grabbed what I could including my PKM machine-gun and hand grenades (at home I sleep with a handgun under my pillow, here I sleep with hand-grenades and machine-guns) and headed for our rally point with my two teammates. It was time to assault out our door and fight the Taliban who had picked the exact right night to attack us….when there was only three of us! It figured to me that my luck had finally run out. If you knew how many times I have been blessed, protected or just lucky you would understand how I have survived this environment for almost 8 years. But it made sense I would get wacked on my last deployment! We were about to make a run at the door, which funneled us into light before we were able to get outside, so we wanted to be fast as it was the most dangerous part of our counter assault.

Suddenly one of the guys phones rang (we had grabbed them to call the Canadians for help once we were outside). Keep in mind this all occurred in under two minutes, and we were still groggy from sleep. He answered the phone thinking it was the Canadians calling to check on us. Our phones do not work inside our tin-roofed round building, but we were close to the door, so the phone worked. He seemed to drop his guard then grunted in disbelief. Yup, it was confirmed, I was sure the Canadians were under attack also and could not get to us to help us. I seemed to find humor in all this…..last tour, survived so much, sure to die, how poetic, a grin creeped over my face as I waited for my teammate to tell me what was said…..

He hung up the phone, dropped his machine-gun down to his feet, smiled at us and said, “The guys are back, they couldn’t reach us on the phone, so they are throwing bowling ball size rocks on our building!”. In disbelief, we just stared at each other, half-dressed, half-asleep, and feeling like idiots! The machine-gun fire was the rocks ROLLING down the side of our building on the tin roof, the guards yelling outside were trying to wake us. Our American occupied building on the base is all fenced in (and locked at night) so our returning teammates had to throw huge rocks about 20 feet to hit the building, as they rolled down the building, it sounded like explosions followed by gunfire. They had decided to come back from Kandahar and we did not know

it. We had a good laugh about it shocked how we could have made such a juvenile mistake after having been attacked for real so many times before.

As Philip McTigue recounted this story, he again mentioned how blessed he was to have survived several real attacks. However, this unique ‘rock’ et attack was one he will never forget, and it certainly was not as it always seemed to be.